Women’s Rights under Threat in Poland

As Unitarians, we have been always taught that in case of conflicts, we should take into consideration the other party’s opinion – long-term understanding and peace can be achieved through compromise. However, in case of the current attacks on human rights in Poland this strategy would be totally wrong.

Since 2015, fundamentalist Catholic teachings have been injected into the Polish legal system. The rights to abortion have been dramatically limited to cases of rape, incest, and serious damage to the fetus. In July 2020, doctors and hospitals were granted rights to refuse to perform an abortion. The legislation on total abortion ban is lining up for convenient political circumstances to be approved by the Polish Parliament.

In July, Polish political leaders have found a new way to subordinate women: it is the proposed termination of the ‘Convention on preventing and combating violence against women and domestic violence,’ called Istanbul Convention. This treaty, signed by 45 states and the European Union, indicates that violence against women is a violation of human rights and defines the victims’ rights to demand free state aid in case of psychological, physical sexual violence, forced marriage, stalking, and so on.  Victims shall be protected without discrimination on any grounds such as sex, gender, and race. The state is obliged to promote social and cultural changes in the behavioral patterns of both sexes, which in turn will lead to real equality between women and men.

For most Poles, the text of the Treaty is uncontroversial and obvious. However, the Catholic Church in Poland and elements of the government maintain that the Istanbul Convention contains elements “of an ideological nature" and is “harmful;” the concept of “gender is “a threat to the traditional family.”

If Poland terminates the Convention, international standards could be lifted; no support and control from international experts would be possible. Victims would only be able to rely on the domestic system of justice, which is now in the hands of a populist-rightist government. This system aims to downgrade the position of women in society; acts of domestic violence would often be treated as family issues and state support for victims could not be demanded. 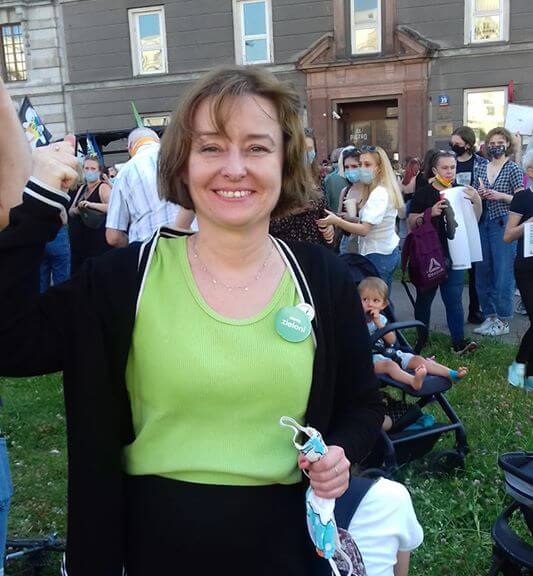 Justyna at the demonstrations
On July 24, 2020 Poland took to massive street demonstrations in support of the Convention. Many participated despite the risk of getting fined. This time no persecutions from the police were reported, probably because authorities wanted to check the power of societal resistance. Demonstrations have led to anger and an increasing awareness of women’s rights.

Polls have been showing for some time that female Polish citizens are getting more liberal. They care for human rights and ecology far more than men do. In the conservative, aging Polish population, young women are a minority - but the future belongs to them. Until then, Polish women – and not only the young feminists– will persevere under the banner “we will not be victims” - and keep on protecting the Anti-violence Convention.

Update: On October 22, a new ruling by Poland’s Constitutional Court imposed a near-total ban on abortion. In cities across the country, thousands are protesting, defying Covid-19 restrictions. Justyna reports from the scene: The fourth day of the fight for the women human rights. I hardly recognise Warsaw centre: complete blocked during the peak hours. Three main bridged and main routes were closed due to cars standing crosswise or some dozens of young people keeping on crossing the pedestrian crossings without any breaks for the cars. The buses stuck in traffic jams, the trams were stopped. Many people nervously tried to find their way home what was hardly possible. Thousands of young girls and women conquered the city: with sharp and even vulgar sentences on their banners directed clearly against the ruling party and the Catholic hierarchy, with loud music and drums, with joy and hope. I realised I faced the female revolution we have been waiting for so long.