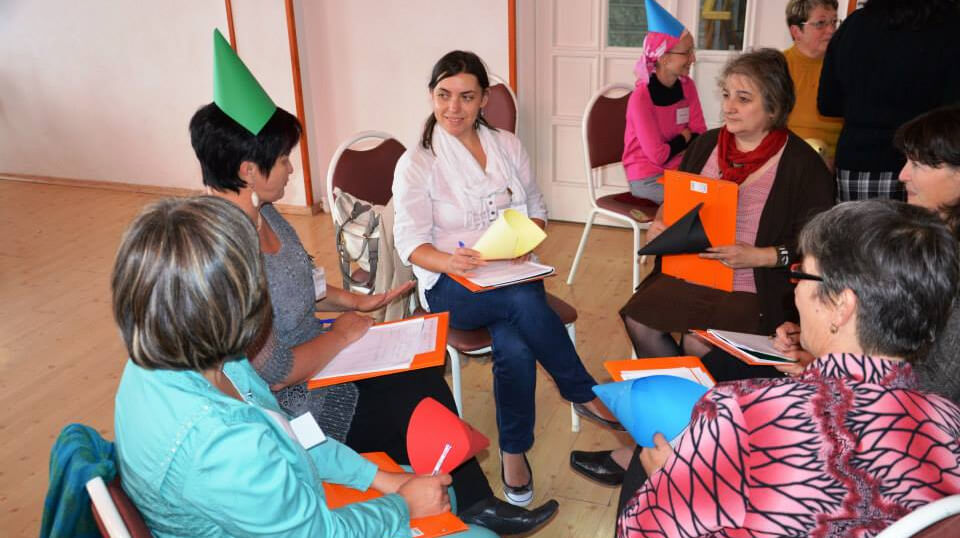 IWC's main partner in Romania is UNOSZ, the National Association of Unitarian Women of Romania; and in Hungary, MUNOSZ, the National Association of Unitarian Women of Hungary. In August 2013, IWC signed a formal agreement with UNOSZ, laying out areas of collaboration and specific organizational sharing: to support Transylvanian Global Sisters initiatives in the priority areas established at the Transylvania Convocation (2012); to support the core of Global Sisters Facilitators trained at the Second Convocation in their effort to continue to hone and develop their leadership skills as they work with congregations; and to establish and support ongoing leadership development for women in Transylvanian Unitarian congregations.

In the spring of 2021, IWC partnered with the Unitarian Providence Charity Organization to provide high-quality laptops for six (6) vulnerable and marginalized girls in Transylvania, a critical lifeline in a COVID-19 world.

The Providence Charity Organization identified the young women in need, and 6 high-quality laptops were bought and distributed. Please see the report of this project, with testimonials and videos of beneficiaries.

The Second International Convocation of U*U Women held in Transylvania in 2012 resulted in proceeds that were committed to the ongoing work of the Global Sisters community building process at the Convocation. Subsequently, UNOSZ and IWC called for proposals for projects/program in the priority areas established at the Second Convo: empowerment and leadership; time management and balance; preservation of women’s traditions and engaging women of the next generation. Unitarian women’s associations were invited to apply from Transylvania and Hungary. Overall, 27 applications were received: 22 from Transylvania and 5 from Hungary. The total grant awarded, in December 2013, was 11300 RON (about $3, 700 at the time). The diversity and the creativity of the projects, together with the interest they generated, clearly demonstrated the unexplored strength of Unitarian communities.  The women’s associations undertook activities that they wouldn’t have had the courage to attempt with their own resources. The planning and the implementation of programs contributed to the building and strengthening of the small local women’s associations.

The Leadership School rose out of the action planning done at the Second Convocation. IWC extended support for this initiative through a UU Funding Program grant and some of the proceeds from the Transylvania Convocation.

The pilot program took place in March 2014, followed by four (4) additional leadership training sessions conducted in 2014 and 2015. Each session, which took place over a weekend, involved over 40 women. Organized under the skillful coordination of IWC board member and UNOSZ vice president Gizella Nagy and her team of volunteers, the three-day presentations were well-balanced with practical sessions: for example, teams created their own community projects, according to specific guidelines and purposes. The curriculum included leadership skills, personal skills, community capacity building and Global Sisters Process, team building and conflict resolution, entrepreneurship, as well as basic grant writing.

In August 2016, UNOSZ carried out a separate leadership / community building training in partnership with the Association of Village and Homestead Caretakers of Romania, with a special focus on volunteering and projects that serve the development of village communities. The training was followed by volunteer actions all over Transylvania.

The leadership school sessions continued in 2018 and 2019 by focusing strictly on one issue: violence against women – particularly intimate partner violence. The phenomenon is a deep societal issue that needs to be addressed. According to statistics, one in 10 women in Romania is a victim of domestic violence.  A woman is beaten every 30 seconds, and 200 die of abuse, yearly. More than half of Romanians think domestic violence is normal – and most cases of intimate partner violence remain unreported.

Topics discussed by mental health professionals and psychologists included types and manifestations of domestic violence, its effects on the surrounding environment, as well as the current Romanian legislation against domestic violence and the policies in place to protect victims. An informational flyer was created and distributed to raise awareness as well as give helpful information, including the national domestic violence hotline.

The two violence prevention sessions (in 2018 and 2019) involved over 40 women each. In February 2020, the program was also organized in Budapest, Hungary.

All the resources and materials of the training sessions are being compiled into a handbook.