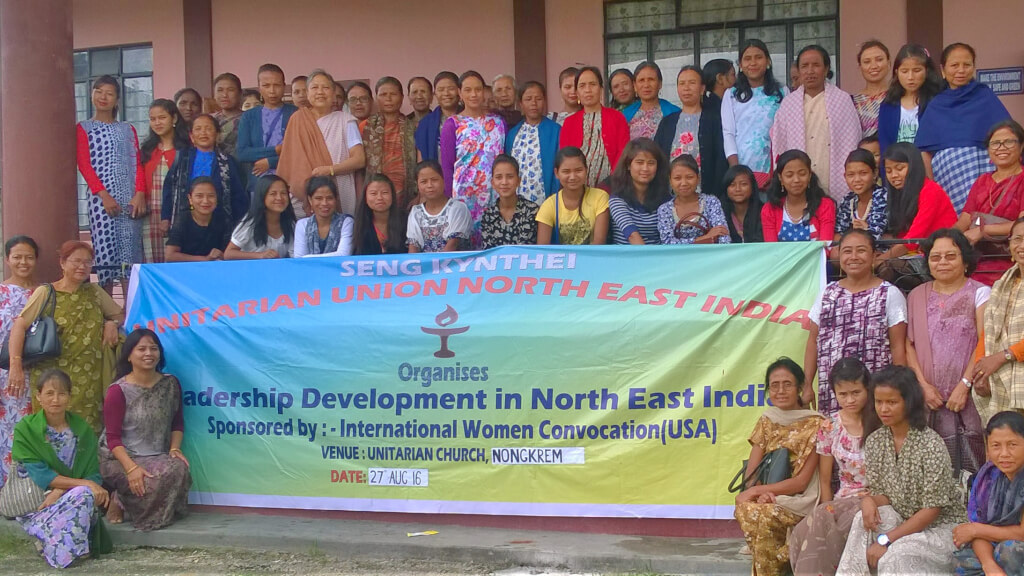 Participants in the Leadership Program

In December 2014, a formal agreement of collaboration was signed between IWC and Seng Kynthei, the Women’s Wing of the Unitarian Union of North East India (SKUUNEI), laying the foundation of a productive exchange.

In the fall of 2020, IWC raised funds to provide COVID-19 awareness programs and care packages for Unitarian families in North East India, stimulate behavioral change toward stigma and discrimination of infected individuals, and address mental health impacts of the pandemic. Awareness programs have also included community education and mobilization to prevent teenage pregnancies and early marriages during the health crisis. Please read the following reports:

In 2015-16, with the support of IWC through a UU Funding Program grant, Seng Kynthei implemented six leadership development training sessions for 30 women in the Khasi and Jaintia Hills, with several follow-up trainings. Each session focused on a different topic: gender roles, gender equity, women’s rights; leadership skills; communication skills and effective communication; sexual and reproductive health; violence against women; and economic empowerment and business entrepreneurship. A handbook in Khasi (with resources and materials) is being prepared by Seng Kynthei.

Positive change attributed to the leadership development trainings is already palpable. Many women have stepped into leadership roles in their churches and communities, working alongside men at the village level.

Despite being matrilineal – where title, inheritance, residence after marriage and succession are traced through female line – the Khasi society is one in which women and girls face violence in every form and at different levels. Patriarchal beliefs of male dominance and unequal gender relations lie at the root of gender-based violence. Violence against women is a growing concern: it is “a multi-dimensional problem that requires a comprehensive prevention strategy,” as our Khasi sisters define it.

For the past five years around November 25, Seng Kynthei, under the leadership of IWC board member Elgiva Dora Shullai and Global Sisters Leadership Council member Dr. Rica Lamar, has implemented violence against women programs in honor of the International Day for the Elimination of Violence against Women. Approximately 900 schoolchildren, youth, and adults have taken part of these trainings in the last 3 years.

These one-day workshops, carried out in several UU communities, provide a channel to address the issue and encourage participants to stand up and speak out against men’s violence against women. The events involve speakers and interactive group work focusing on issues such as the role of women in the Khasi matrilineal society, gender roles, gender-based violence, use and misuse of power, gender equity, women’s legal rights and the various government laws that are already in place to protect, prevent, and curb violence. Participants are also acquainted with the White Ribbon Campaign: men are asked to wear white ribbons as a symbol of their opposition to violence against women, as well as pledge together to report incidences, be vigilant, and commit to ending violence.

A significant change attributed to the awareness campaigns is that rape cases are starting to be reported. Women are finally daring to break their silence and take their cases to the authorities.