On 20 December 2020, the Seng Kynthei Women’s Wing of the Unitarian Union of North East India (UUNEI) celebrated its 40th anniversary – in place of its Biennial Conference – at the Unitarian Church of Jowai. The event was organized by the local women’s association, under the leadership of Kong Tippor Shullai, Secretary of the Seng Kynthei Jowai Church.

The celebration was inspiring and memorable, opening with the raising of the Seng Kynthei flag in the compound of the Jowai Church by the Vice President, Kong Dorismoom Mylliemngap. Then participants gathered in the church, with strict adherence to the COVID-19 protocols. Two stalwarts of the organization, Kong Newyorksila Nongbri, Founding President, and Kong Moltiferra Rani, Founding Secretary, were honored for their achievements and for the recording of the history of the re-organization of the Seng Kynthei. 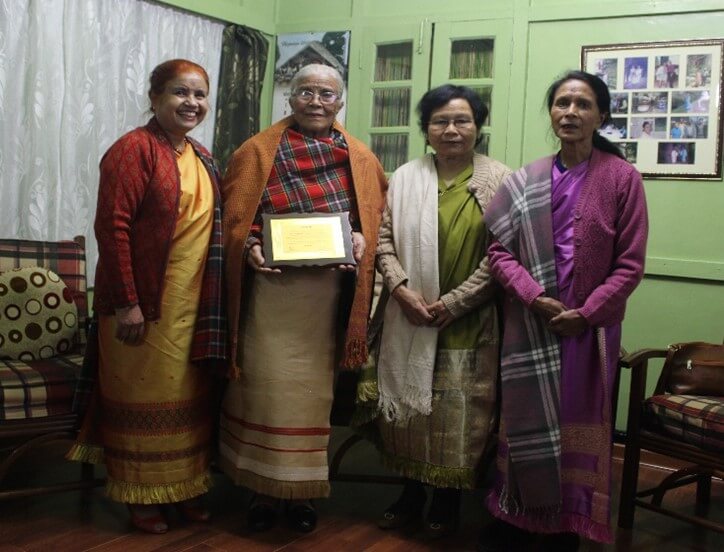 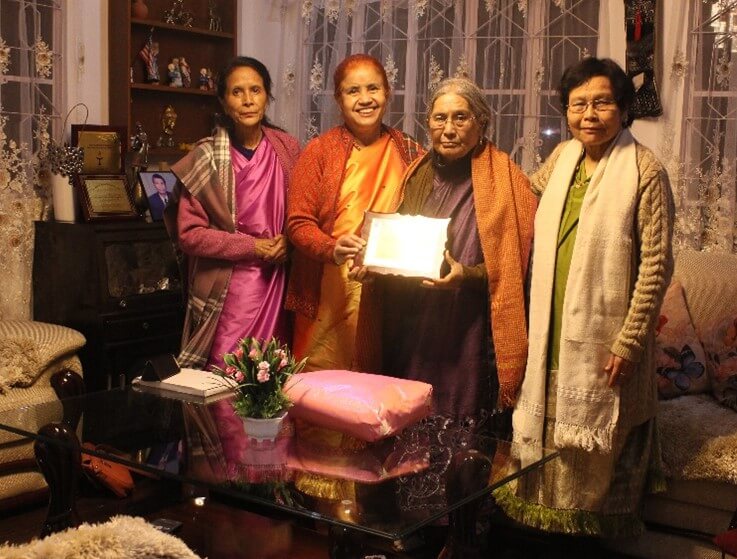 A third award was conferred on Kong Hamli Shylla, the organization’s first 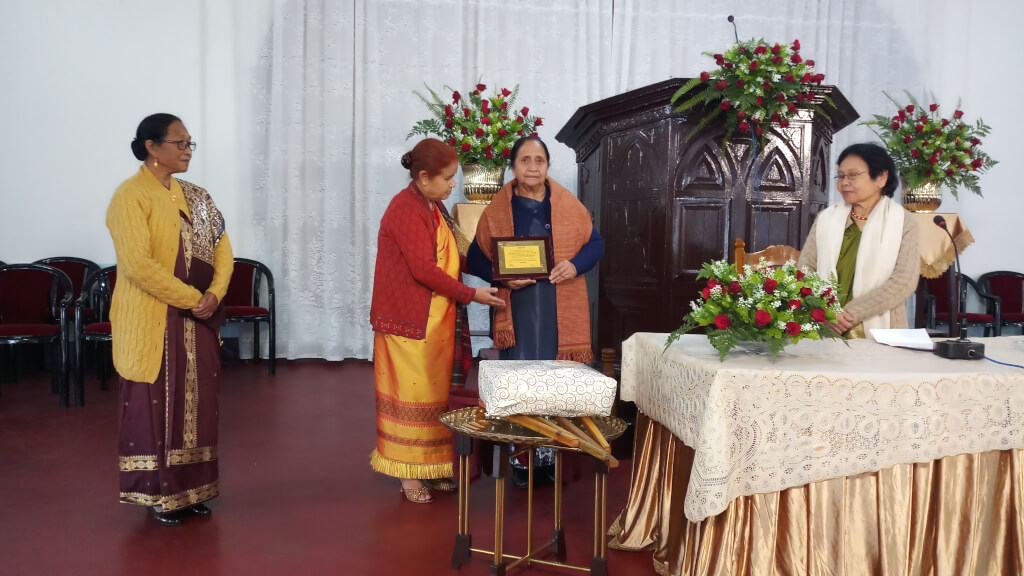 Presentation of the award to Kong Hamli Shylla
Treasurer. Seng Kynthei President Kong Battinora Rani welcomed Kong Hamli Shylla and the members present and presented a small gift to her. She called upon the current Treasurer, Kong Riehtngen Shylla, to honor her with a traditional shawl; the Memento was read by Seng Kynthei Secretary Dr. Creamlimon Nongbri.

The awards ceremony was followed by an online service moderated by Seng Kynthei President Kong Battinora Rani, who lighted the chalice. The service was led by Kong Rita Pakma from the Unitarian Church of Jowai and included the church choir. Rev. Darihun Khriam, Unitarian Minister and General Secretary of the Unitarian Union of North East India, delivered an inspiring sermon. Kong Tistalang Shadap from Mukhap Church offered the prayer; the benediction was offered by moderator Kong Battinora Rani. The celebration closed with lowering of the flag by Seng Kynthei Vice President Kong Dorismoom Mylliemngap.

The Seng Kynthei Unitarian Union of North East India (SKUUNEI) was formed at the time of the founding of the Unitarian Movement in North East India. Mrs. Pharienbon Rani (Hajom Kissor Sing’s wife) was the first woman to join the Unitarian movement, before the inception of Unitarianism in Khasi & Jaintia Hills on 18th September 1887. She was given the title of “Mother of Khasi Unitarians” by (L) Rev. J. T Sunderland. Along with her, there were three prominent ladies – Kurimai Lyngdoh and Hirbon Lakadong from Jowai and Sian Wahlang from Madan Laban – who worked together with the founder and other co-founders of Unitarianism in the Khasi, Jaintia & Mikir Hills.

However, during that initial stage, the women were not so organized and thus did not have separate office holders or funds of their own. Though the women who attended the General Annual Conference were allowed to hold a women’s service on Saturday during the General Annual Conference of the Church, only a few women could attend. Seng Kynthei was not fully organized, so all contributions made by women during the women’s services – however meager – were deposited to the Unitarian Union.

Seng Kynthei’s re-organization dates to the visits in 1977 of Unitarians from different parts of the world, which led to the forming of close worldwide connections. Miss Newyorksila Nongbri took part in the IARF Conference held in Oxford, U.K. in 1978. There she met many women who were interested to learn about the Unitarians in the Khasi Hillsm including Ruth Navendeisser from New York City, who worked at the UN.  She invited Kong Newyorksila Nongbri to the U.S., who accepted readily.  Ruth took her around New York and showed her the UN. She also gave Kong Newyork a small contribution from the West Minster Church in NYC, which could be used for any fitting purpose.

It was in 1980 at the General Conference at Nongtalang Village that Kong Newyork Nongbri called an urgent meeting of women. She told the story of how she had received the $25 and suggested that it could be utilized for strengthening Seng Kynthei.  Then and there Kong Newyork was elected President of Seng Kynthei and Kong Moltiferra Rani its Secretary. It was also at that meeting that a decision was taken to raise funds for the organization following the General Conference service. Kong Moltiferra Rani’s dynamic leadership took Seng Kynthei forward to mobilize funds for the organization. Kong Hamli Shylla was elected the first treasurer. Apart from the Sunday Service offering & rice collection, the organization started to generate funds from its members towards the Social Service Fund, Education Fund, and so on.

Seng Kynthei has been engaging in community outreach for several social programs. With the support from the President, the General Secretary, and the Treasurer of the UUNEI and the whole Unitarian community, many programs such as free health camps, community development programs and the like have been held. These programs have empowered women and affirmed the church’s moral and social responsibility towards fellow Unitarians and society at large.

Seng Kynthei’s collaboration with U*U international organizations, including IWC, has further enhanced the work of the Seng Kynthei through guidance and support. Seng Kynthei owes and conveys sincere gratitude to all members of the local and global community for their support.